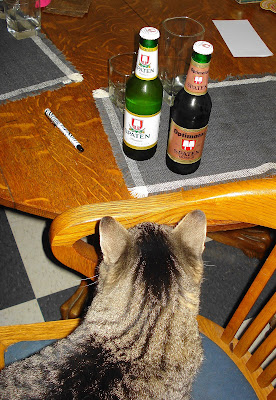 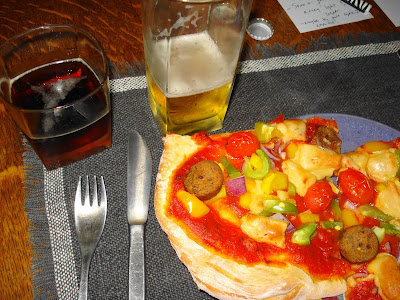 Me and the missus were walking through downtown Chicago when we lived there, in September of 1993, at Adams and State, and the streets were closed around the Berghoff and people were tanking up on beers and brats and it was quite joyous and wonderful. My God, why wouldn't you want to have beers on a nice September afternoon, closing down streets, midweek in the exact center of one of the biggest cities of the world? So, that is where we learned that Oktoberfest is held actually in September. According to a few drunks who cheerfully explained why the whole thing was a month early. Whatever. (anybody else remember the scene in National Lampoon's European Vacation, the Oktoberfest riot????)
So, I am at the beer and wicked tasty specialty food store and see beers by Spaten of Munich. I am thinking "Fall=Oktoberfest at my house!" and got the Optimator and the premium. I knew nothing of these, except one is dark, one light. Me and the missus, and Spike the cat set out glasses and cold bottles and PIZZA and got down to it! Oh, life is good.
The optimator seems like (I havn't read anything about it yet--I like to taste and write with an open mind) a good dark bock beer, which means a dark lager. pretty tasty, a little toasted malt or something.
The pale premium, though? Holy CATS! BUY THAT! I did taste tests of two famous European lagers this summer--Stella Artois and Pilsner Arquell, and Spaten is 1000 times better. A million times better! Huge foamy head and delicious flavor. That satisfies this regular guy.
So, Optimator, a dark bock beer, 7 thumbs up out of ten, and the pale pilsner lager called Spaten Premium: 11 thumbs up out of 10!!!!
Posted by gary rith at 6:51 PM

I don't know anything about beer, but I know a fantastic pizza when I see one.

No kidding about the pizza. That look deelish!

Not a beer drinker, and my husband and friends insist I am not a wine drinker either since I like really sweet wine...like sangria, so I will just have to trust you on this one!

Oh, my. I just clicked on the Spaten links and I think I need to go shopping!
I'm feeling very thirsty.
I'll take one of each, please!

I believe that it was Benjamin Franklin who said, "Beer is proof that God loves us and wants us to be happy." I have a t-shirt to remind me of this, but not too many places I can wear it...

For anyone who lives near El Paso, TX, the annual Oktoberfest at Fort Bliss (put on by the German soldiers there) is WUNDERBAR! They bring in the Bier and band from Deutschland.

KC, I bet you'd like this!
It was fine pizza, and I'm gonna make another for tonight, yes indeedy....

Spaten Optimator is my hubby's favorite beer. He just found Paulaner Oktoberfest - which is hard to find- and he is a happy camper! 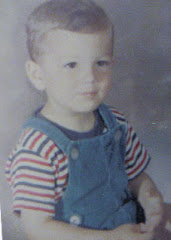 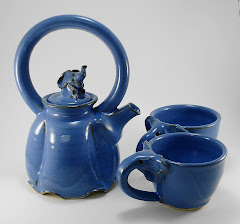 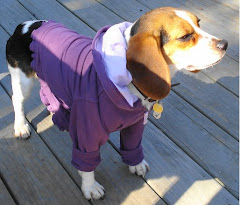 over 100 comments and 100s of jokes from Potter's Blog readers around the world!

ANOTHER ARTIST FOR OBAMA 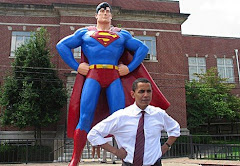 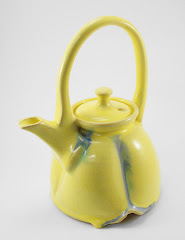 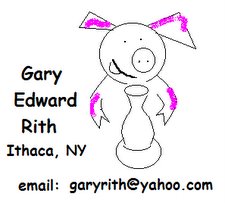 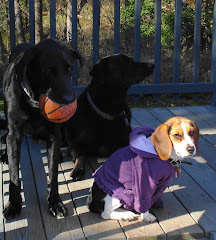 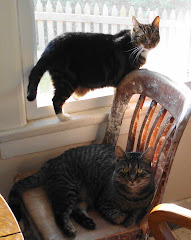 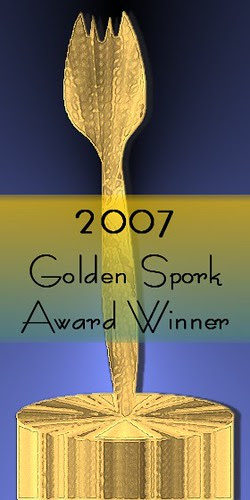 As my old pal Gordo says: "You want plain, old pots or plates? Go see the other guys. You want whimsy and creativity? Gary's the man!" -------Like what you see? email me at garyrith@yahoo.com OR Click here to browse and shop my online gallery!

my pots are lead-free, microwaveable and dishwasher safe, just don't drop them!

Mary Lee got her pots and says:
"Love 'em both......I'm also much relieved to find that both pieces are useable in any of the traditional manners, micro, dishwasher, etc., something I'd wondered about.

I'm truly delighted ....the glaze is so very much nicer in person. Photos do not do it justice, alas! "

gary rith
Gary Rith is a full-time studio potter and also an instructor of pottery at Cornell University's Pot Shop. Gary started learning pottery in 1983. In 1985 he served as an apprentice to Dean White of Deansboro, NY and earned a bachelor's degree in art from Bennington College in 1987. He has been a full-time sculptor and potter since 1997. Gary started his business in New Hamspshire, where he was selected as a member of the League of New Hampshire Craftsmen in 2004 and in 2005 was named one of New Hampshire's Emerging Ceramics Artists. He moved to the Ithaca, NY area in 2006, near where he grew up, and is happily making pots and sculpture in a purple house on Fall Creek. Gary likes to laugh, and his first goal is to have fun making pots. 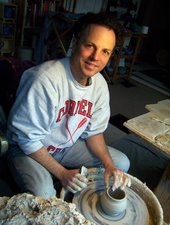 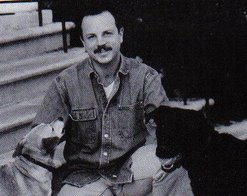 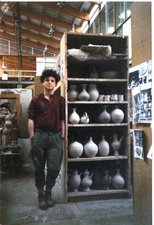 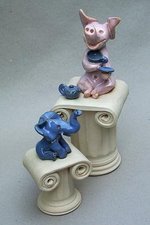 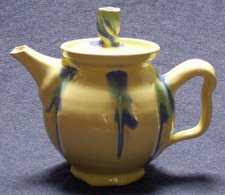 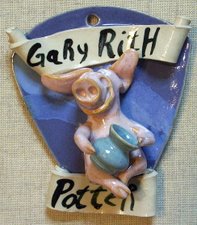 From Quebec, Mags gets excited:

GUESS WHAT? My pots arrived! Oh my GOD! They are beautiful and you are soooooooooo sweet

Thank you so much for the prompt delivery...... I LOVE it!!! This day has been very stressful, and your package certainly brightened it. :-) (Sometimes all ya need is a couple of pigs!) These will be favorites. Thanks again, M.P.

When Mona opened up her box of pots she said:

I went all gooshy 'cause they're absolutely amazing! The pigs are gosh-darned cute, and the glaze-work is gorgeous! I can't keep my hands off them! Seriously! I keep finding excuses to walk by them .....

Lucia has something to say:

Gary - You're awesome. The vase is beautiful!! It's even more lovely than it looked in the photo. And the surprise, I laughed so loud at its cuteness that a co-worker came in and asked what was so funny. Thank you so much! I felt just like it was Christmas here in the office this morning, and I'm smiling. Wooooohooo!!! You're excellent. --Lucia

The package made it in excellent condition! I absolutely loved them. I almost couldn't part with the pig mug, but I gave it to my coworker for her birthday who is in love with pigs.

"Gary, my pots arrived! They're beautiful just as I expected I just wanted to thank you ever so much...adorable." Maggie